The following pages contain family trees and brief accounts of the lives of James & Margaret's children, or at least of the seven who had families of their own. Albert, who did not have a family, is mentioned below. For some of these people (e.g. Harry) the available information is sparse. Any contributions to this website of additional facts or stories, however minor, about any of the seven would be very welcome. 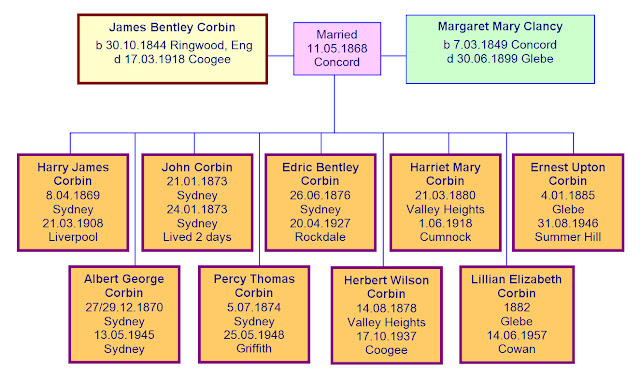 
Albert George Corbin  was the second son of James & Margaret, born in Sydney in December 1870. Albert graduated in medicine from Sydney University. In 1901 he was a medical officer at Sydney Hospital, later medical superintendent, then in 1908 he set up as an eye specialist in Macquarie St, and from 1914 was an opthalmic surgeon. For many years he lived in the city at the Australian Club. He was known to many of the Corbins, who 'went to Uncle Bert to have their eyes done'. He died on 13 May 1945 at 151 Macquarie St aged 74 and is buried at South Head Cemetery.